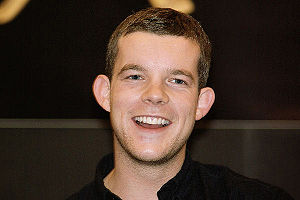 Russell Tovey grew up in Billericay, Essex.[2] Tovey is known for playing the role of werewolf George Sands in the BBC's supernatural drama Being Human[3] which started in 2008. In November 2011, Tovey announced he would be leaving Being Human to work full-time on his BBC Three sitcom, Him & Her.[4] Tovey is also known for his portrayal of the character of Rudge in both the original London and Broadway stage version, and later the film, of The History Boys.

"... Tovey also played Steve in Him & Her and is currently in The Job Lot. As an openly gay actor, he said this year he is waiting for the right gay role to come along."[5]