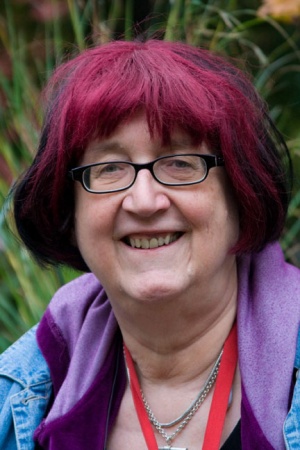 Roz Kaveney
Roz Kaveney (born 1949) is a writer, critic, and poet, best known for her critical works about pop culture and for being a core member of the "Midnight Rose" fantasy wrting collective.[1][2] Kaveney's works include fiction and non-fiction, poetry, reviewing, and editing.[3]

Kaveney attended Pembroke College, Oxford, where she participated in a poetry group that had a particular interest in "Martian poetry" (which employs unusual metaphors to render everyday experiences and objects unfamiliar) and shared a flat with the poet Christopher Reid. She gave up poetry in her twenties, not resuming it until she reached her sixties. Kaveney's poetry was originally written in a rhythmic free verse, although her work later shifted into formalism. For a time she earned a living as a sex worker, and in later years has worked as a transgender rights activist.[4]

Kaveney has contributed to several newspapers such as The Independent and The Guardian. She is also a founding member of Feminists Against Censorship and a former deputy chair of Liberty. She is deputy editor of the transgender-related magazine META.

In July 2008 Roz Kaveney was involved in an incident at London Pride. At about 6:30pm on Pride day, she needed to use the toilet in Trafalgar Square but was told by stewards that she wasn't allowed to use the ladies. Pride London later apologised for this.[7]