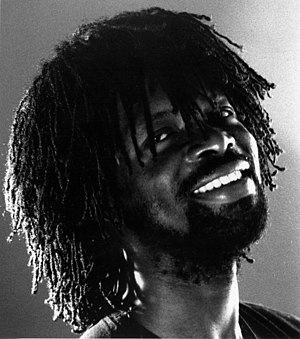 Rotimi Fani-Kayode
Oluwarotimi (Rotimi) Adebiyi Wahab Fani-Kayode (20 April 1955 - 21 December 1989)[1] was a Nigerian-born photographer, who moved to England at the age of 12 to escape the Nigerian Civil War. The main body of his work was created between 1982 and 1989. He explored the tensions created by sexuality, race and culture through stylised portraits and composition.

Rotimi was born in Lagos, Nigeria, in April 1955, as the second child of a prominent Yoruba family that moved to Brighton, in 1966, after the military coup and the ensuing civil war. Rotimi went to a number of British private schools for his secondary education, including Brighton College, Seabright College and Millfield, then moved to the USA in 1976. He read Fine Arts and Economics at Georgetown University, Washington, DC, for his BA, continued on for his MFA in Fine Arts & Photography at the Pratt Institute, New York. While in New York, he became friendly with Robert Mapplethorpe, who he has claimed as an influence on his work.

Fani-Kayode returned to the UK in 1983. He died in a London hospital of a heart attack while recovering from an AIDS-related illness on 21 December 1989. At the time of his death, he was living in Brixton, London, with his life partner and collaborator Alex Hirst.

"Rotimi was my friend, my lover but also my collaborator—unusual, especially for a a black man and a white man."[2]

Fani-Kayode admitted to being influenced by Mapplethorpe's earlier work but he also pushed the bounds of his own art, exploring sexuality, racism, colonialism and the tensions and conflicts between his homosexuality and his Yoruba upbringing through a series of images in both colour and black and white.[3] His work is imbued with the subtlety, irony and political and social comment. He also contributed to the artistic debate surrounding HIV.[4]

He started in 1984 to exhibit and was part of eight other exhibitions by the time of his death in 1989. His work has been featured posthumously in many exhibitions and retrospectives.[3] His work has been exhibited in the United Kingdom, France, Austria, Italy, Nigeria, Sweden, Germany, South Africa and US.

In 1987 along with Mark Sealy, he co-founded the Association of Black Photographers (now Autograph ABP) and became their first chair. He was also an active member of the Black Audio Film Collective.[5] He was a major influence on young black photographers in the late 1980s and 1990s. Following Hirst's death in 1992, some controversy has persisted about works attributed to Fani-Kayode.[5]

"My identity has been constructed from my own sense of otherness, whether cultural, racial or sexual. The three aspects are not separate within me. Photography is the tool by which I feel most confident in expressing myself. It is photography therefore — Black, African, homosexual photography — which I must use not just as an instrument, but as a weapon if I am to resist attacks on my integrity and, indeed, my existence on my own terms."[6]