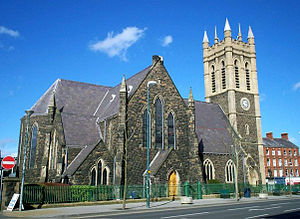 St Mark's Church
Portadown is a town in the Armagh City, Banbridge and Craigavon district of Northern Ireland, historically in County Armagh. It lies on the bank of the River Bann, and is considered part of the "Craigavon Urban Area".

In 2014 the Equality Commission were involved after Nick Williamson,of Blufire Media, Portadown, refused to print the first print edition of MyGayZine because of his Christian beliefs, but the matter was not taken further.[1]

In June 2015, Presbyterian ministers from across County Armagh met to discuss Rev Christina Bradley over her outspoken support for a "yes" vote in the Irish Republic's referendum on same-sex marriage.[2] In September that year she was reported as having accepted that "same-sex marriage is contrary to the will of God revealed in the Bible" and that "homosexual practice is sinful in God’s sight." Canon Charles Kenny, spokesperson for Ireland’s gay affirming group Faith in Marriage Equality, said he "was dismayed that such pressure had been put on the Presbyterian Minister to recant".[3]