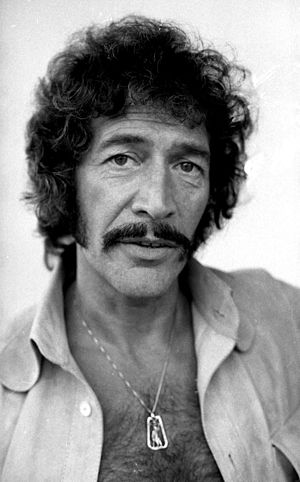 Peter Wyngarde, photographed by Allan Warren
Peter Wyngarde (1927-2018) was a British actor, best known for portraying the detective Jason King in the television series of the same name.

In 1959 he starred in the television play South, considered to be the first depiction of homosexuality on British television.

In October 1975 Wyngarde was prosecuted for gross indecency. He was prosecuted and convicted under his real name Cyril Goldbert for an offence with a 24 year old man in the toilets at Gloucester bus station.[1] His solicitor stated that his client denied he was homosexual.

Wyngarde shared a flat for a number of years with Alan Bates.

In July 1974, Jeremy Dallas-Cope, a 23-year-old described as Wyngarde's former "male secretary and personal assistant", was found guilty at his trial at the Old Bailey and sentenced to two years' imprisonment, for forging nearly £3,000 worth of cheques from the actor's bank account. Upon the fraud scheme being discovered Dallas-Cope persuaded his flatmate Anthony O'Donoghue, a male model, "to attempt suicide and take the blame". O'Donoghue was found by police when close to death, and was sentenced to 15 months, after also being found guilty.