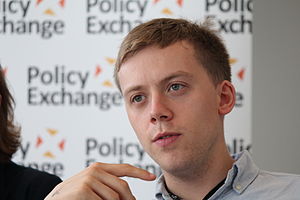 Jones was born in Sheffield and grew up in Stockport, Greater Manchester.[1] He is the son of a local authority worker and an IT lecturer[2] and describes himself as a "fourth generation socialist"; He attended Bramhall High School and Ridge Danyers Sixth Form college (now Cheadle and Marple Sixth Form College)[3] before reading history at University College, Oxford, graduating with a BA in 2005 and a Master of Arts in US history in 2007.[4] Prior to his media career, Jones worked as a trade union lobbyist and as a parliamentary researcher for the Labour Party.[5][6]

He was listed in the "Journalists" section of the Pink List 2012. The citation said:

"The Sheffield-born Oxford history graduate saw his book, Chavs: The Demonisation of the Working Class, top last year's political bestseller lists. Worked in politics before joining The Independent — and he's only 28."[9]