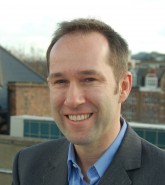 He had computer games and how-to books published at the age of 16, and graduated from Sunderland in data processing.[1] While a student he co-founded the International Gay and Lesbian Youth Organisation[2] In the 1980s he set up Prowler Publishing and in 1997 he became a director of Stonewall.[1]

In 1999 he substantially sold his interest in Prowler, and has since worked as a freelance strategy consultant.