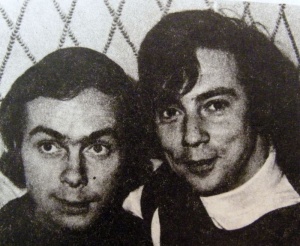 Tony Ryde and Michael Launder
Michael Launder (1942-2013) was the founder of Friend, the counselling and befriending organisation which was part of CHE from 1971 to 1975, before going independent. Originally called Task Force, it came out of the first pan-London CHE meeting in April 1971, but was very much one man’s vision. At that time there was no service dedicated specifically to the counselling needs of lesbians and gay men, and it was Michael’s vision that developed a service which was managed and staffed predominantly by homosexuals (although suitably empathetic heterosexuals were also welcome).

"FRIEND" originally stood for Fellowship for the Relief of the Isolated and Emotionally in Need and Distress, an acronym dreamed up by Michael but soon discarded, because it was a perfectly good name anyway. Michael insisted that IF it was going to be taken seriously, befrienders needed serious training. He also produced the development plan which led to seeking charitable status and Home Office funding. Under his guidance the first half dozen Friend groups were started around the country by local CHE groups.

He is survived by his partner of 45 years, Tony Ryde, who was also a leading light of early CHE, and nursed him through a long and painful final illness.

Based on an article in the CHE Newsletter, Autumn 2014.