This article is about the former MP; for the veteran gay activist, see Michael Brown. 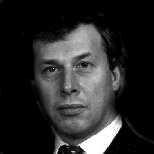 In 1994 The News of the World published pictures of him on holiday in Barbados with a 20 year old gay man (the age of consent for gay sex was 21 at the time) causing him to resign his post as an assistant Government whip. At the 1997 general election he contested the new Cleethorpes seat (his former constituency having been abolished) but was defeated.

He has since become a sketchwriter for The Independent and a commentator on television news.