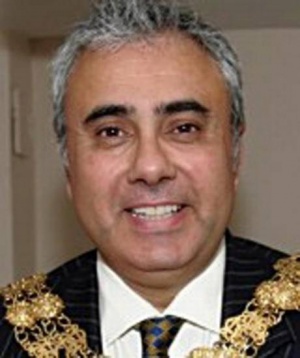 He was elected as a Conservative, but in 2004 he switched to the Liberal Democrats.

"I think that I was going through a mid-life crisis... The then Conservative leader of Richmond Council treated me badly because for some reason he thought that politically I was hugely ambitious- which I am not. I was having a really bad time and I thought that I would have a lot in common with the Lib Dems."[2]

In 2007 he was elected Mayor of Richmond, becoming the first openly gay mayor in London. He appointed Mario Cardu as his consort, but Mr Cardu resigned from this position after the council allegedly refused to refer to Mr Cranfield-Adams as ‘the first openly gay mayor for Richmond Upon Thames’ in a press release.[3] At the end of his term as mayor he switched back to the Conservatives.

"Twenty years ago we all (gay Tories) had to be secretive and run around behind closed doors, now the Conservative Party is full of openly gay people and I’m proud to be a part of that. ... The Liberal Democrats in Richmond have shown themselves up as being a bunch of bullies."[2]

He stood down as a councillor in 2010, and said he intended to publish a book, Rotten Borough, Rotten Politics about his time on the Council.[4]