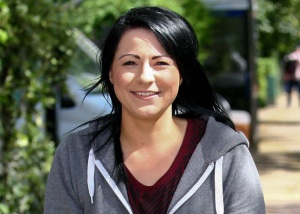 Lucy Spraggan
Lucy Spraggan (born 1991) is a musician, who describes her music as 'A-Flop', a mixture of acoustic, folk and hip-hop.[1]

She auditioned for The X Factor in 2012, performing her own composition, "Last Night".[2] On 3 November 2012, it was announced she would be quitting her run on 'The X Factor' due to illness, so she subsequently finished in ninth place, and second in her category. She was the first contestant in the show's history to score a Top 40 single and album before the live shows even aired, with her independently released album Top Room At The Zoo.

Spraggan is openly lesbian.[3] Her mother, Anstey Spraggan, is a freelance journalist and has written about their family life as a stepfamily.[4]

Before music, Spraggan trained to be a firefighter, and has had a variety of jobs - a plumber's apprentice, a cave tour guide, and a magician.[5] She also worked in demolition and broke her leg when a cherry picker she was working on fell to the floor.[6]

"The 21-year-old X-Factor finalist has broken the talent-show-puppet mould by singing her own self-composed songs throughout this year's series. Discussing coming out to her family, she recently said: 'Saying I was gay was like saying, I'm going to the shop,' There was no shock."[7]