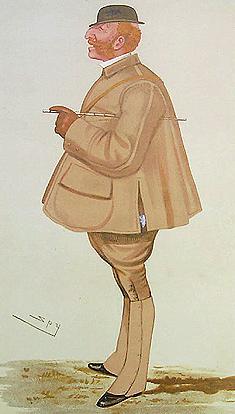 Caricature of Lord Arthur Somerset from Vanity Fair
Major Lord Henry Arthur George Somerset DL (17 November 1851 – 26 May 1926) was the third son of the 8th Duke of Beaufort and his wife, the former Lady Georgiana Curzon. He was head of the stables of the future King Edward VII (then Prince of Wales) and a Major in the Royal Horse Guards.

He was linked with the Cleveland Street scandal, wherein he was identified and named by several male prostitutes (post office boys) as a customer of their services. He was interviewed by police on 7 August 1889; although the record of the interview has not survived, it resulted in a report being made by the Attorney-General, Solicitor-General and Director of Prosecutions urging that proceedings should be taken against him under section 11 of the Criminal Law Amendment Act 1885. A piece of paper was pasted over Somerset's name in the report, as it was deemed so sensitive. However, the Director was told that the Home Secretary wished him to take no action for the moment. The police obtained a further statement implicating Somerset, while Somerset arranged for his solicitor to act in the defence of the boys arrested over the scandal. After the police saw him for a second time on 22 August, Somerset obtained leave from his regiment and permission to go abroad.

The government, including the Home Secretary and Lord Salisbury, the Prime Minister, we're accused of a cover-up. They certainly delayed proceedings long enough for the aristocrats could get away. They were concerned, not only with exposing Lords and MPs, but Somerset's solicitor appeared to be trying to implicate Prince Albert Victor, the second heir to the throne.

According to cavalry trooper Fred Jones, a rent boy at the Hundred Guineas Club at the time, all army recruits were initiated into sodomy by their NCOs immediately upon enlistment. Mrs Truman ran a Tobacconist next to the barracks in Albany Street, she took orders from 'gentlemen' and let the boys at the barracks know 'the orders'. When Mrs Truman died, a series of clubs opened up, including 19 Cleveland Street and the upmarket Hundred Guineas Club.

Lord Arthur went to Homburg, although he returned to England when his Grandmother died. When tipped off in September that charges were imminent, he fled to France to avoid them. From there he travelled through Constantinople, Budapest, Vienna, and then back to France, where he settled and died in 1926, aged 74.