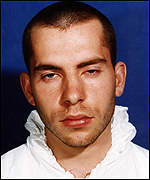 David Copeland
David Copeland (born 1976) is a neo-Nazi extremist who carried out bombings in Brick Lane, Brixton, and the Admiral Duncan in Soho, in April 1999.

Copeland had been a member of the British National Party and then the National Socialist Movement. In Aprl 1999 he started a series of nail-bomb attacks on ethnic groups and the gay community:

Copeland was identified through CCTV footage of Brixton, and arrested on the evening of the Admiral Duncan bombing. He immediately confessed to the bombings. At his trial, he attempted to plead guilty to manslaughter on the grounds of diminished responsibility, but was convicted of murder and given six concurrent life sentences. It has been ruled that he must serve at least 50 years.

The 17-24-30 No to Hate Crime Campaign commemorates the dates of the three bombings.