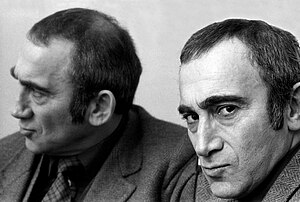 Bart was born in Stepney. His parents were Jews from Galicia, central Europe, and his surname was originally Begleiter.

At the age of 14 he won a Junior Art Scholarship to Saint Martin's School of Art, but thereafter gave up painting. From 1952 onwards he began writing songs, first for the International Youth Theatre and then for the left-wing Unity Theatre, St Pancras. His early pop songs included "Living Doll", written for Cliff Richard, and "Little White Bull" for Tommy Steele, and he won several Ivor Novello Awards. Bart could not read or write music, and he composed by humming the tunes as getting others to transcribe them.

Bart's musical Oliver!, based on Dickens' Oliver Twist, was an outstanding success in the West End and on Broadway, and was made into an Oscar-winning film, earning Bart a vast amount of money, estimated to be bringing him in £16 a minute at one point,[1] and Bart lived an extravagant lifestyle, throwing lavish parties.

Bart's later productions were much less successful, and cost him most of his fortune. In 1972 he was made bankrupt, and he descended into depression and alcoholism. He eventually stopped drinking with the help of Alcoholics Anonymous, but by this time his health had been severely damaged.[2]

During his years of success the media had linked him with Judy Garland and Alma Cogan, but friends and colleagues knew he was gay. He came out a few years before his death.[2]