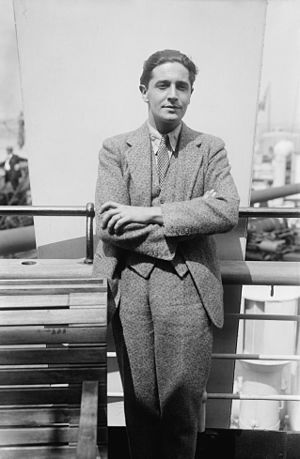 Ivor Novello
Ivor Novello (born David Ivor Davies, 1893–1951) was born into a musical Welsh family and became a very popular actor, composer and playwright, famous for his escapist and lavish operetta-like musicals. He acted in two of Hitchcock’s silent films, and also had a brief career in Hollywood. He was dubbed Britain’s handsomest screen actor and the glamorous matinée idol’s funeral attracted hordes of his female fans.

He was born in Cardiff to a father who was a rent collector and a mother who was a successful singing teacher and choral conductor. She later set up a teaching practise in London, where Ivor met many important performers. He studied harmony and counterpoint with the organist of Gloucester Cathedral, and went on to gain a scholarship to Magdalen College School in Oxford. In 1913 he settled in London, where he lived above the Strand Theatre in the Aldwych, and this remained his London home for the rest of his life. He now started to use the name Ivor Novello, and in 1927 he changed his name by deed poll.

In 1914 he made his name with the song Till the boys come home, with the famous line "Keep the home fires burning". He was soon contributing songs to musical theatre shows, but in 1920 he began his acting career in silent films, including Alfred Hitchcock’s The Lodger, which was based on Jack the Ripper, a very different role from those he later made famous. He also acted in straight drama, and after taking two plays to New York, he was approached by Hollywood. He only made one film there, but he worked on the minimalist script of Tarzan the Ape Man, for which he is said to have come up with the line "Me Tarzan. You Jane".

Back in London, in the 30s he worked as actor and playwright, and began to produce musical theatre, with lavish theatrical effects and escapist plots for which he was to become famous, including Careless Rapture and Crest of the Wave. He played the romantic lead in these, and in all but his last show from then on. The Dancing Years was one his most successful shows, though it had to close at Drury Lane at the beginning of World War Two, toured the country and ran for over two years from 1942 at the Adelphi in London. In 1944, during its run, he was charged with improper use of his car during rationing, and he spent four weeks in Wormwood Scrubs prison, which affected him very badly.

Perchance to Dream, his next show, included the popular song "We’ll Gather Lilacs". His last two shows were King's Rhapsody and Gay’s the Word, which had, unusually, no role for Novello, as he was still performing in King's Rhapsody. He felt unwell during the run, and went to recuperate at his house in Jamaica, but on his return, insisted on performing, and died of a coronary thrombosis at his home after the show.

He was cremated at Golders Green, and his ashes lie under, appropriately, a lilac tree. Huge numbers of his female fans lined the streets at the funeral, and when a memorial service was held at St Paul’s church in Covent Garden, it was relayed outside to the many thousands who turned up.

In theatrical circles his homosexuality was an open secret. Although he had a life partner, he was known to have many lovers.

There is a story, mentioned by Peter Tatchell, that Winston Churchill had a one-off fling with Ivor Novello.[2]

The Ivor Novello Awards for songwriting and composing (known as The Ivors) have been presented annually since 1955 by the British Academy of Songwriters, Composers and Authors.

The Royal Academy of Dramatic Art created a scholarship in his memory. His country home, Redroofs near Maidenhead, is now a theatre training school.

In 2005 the Strand Theatre, where he lived for many years, was renamed the Novello Theatre, and it also has a blue plaque to Novello.

There is a blue plaque at his birthplace in Cardiff, and he has a statue at Cardiff Bay.