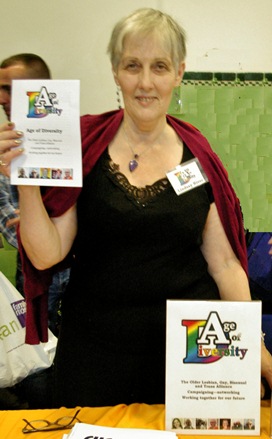 Lindsay River has been a campaigner and activist for lesbian and gay equality since the 1970s. From 1993 to 2009 she was director of Polari, which did ground-breaking research into the needs of older LGBT people, and campaigned for more inclusive services. Polari came to an end when, as with so many other voluntary organisations, it was no longer sustainable because of funding difficulties.

Part of Polari's work was to stimulate the creation of social and support networks for older LGBT people. Much of this work has since been taken on by Age UK. through local and regional Age UK organisations, and LGBT forums and other organisations locally. Age of Diversity will work closely with such bodies, but has a different focus: acting as a voice for older LGBT people at national and regional levels.

Lindsay River has spoken at many conferences and events around the country, and has written various reports and articles about older LGBT people.

She was included under "Unsung heroes" in the Independent on Sunday's Pink List 2008. The citation said:

"Lindsay River is a veteran member of Polari since 1993, an organisation for older gay people. Now 61, she has been an activist on lesbian and gay rights since 1972. She has also worked extensively with the charity Age Concern and she is researching the experience of lesbian, gay and bisexual groups in the health service."[1]