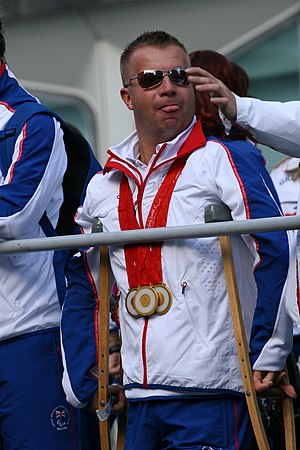 He was born with arthrogryposis multiplex congenita meaning he can’t move his ankles or knees, so he controls horses using his hips.[1]

He first came to public attention in 1980 when British Prime Minister Margaret Thatcher carried him up the staircase in 10 Downing Street having awarded him a "Children of Courage" medal. He won three gold medals in the championship dressage, freestyle dressage, and team dressage events at the 2000, 2004 and 2008 Summer Paralympics. He turned professional after he was inspired by the Atlanta Olympics.

Pearson was awarded an Honorary Doctorate from Staffordshire University in July 2005.

He received a CBE in the 2009 New Year Honours for services to equestrianism and disabled sport.

Lee Pearson currently lives in Cheddleton, Staffordshire. He is openly gay,[2] having come out to his parents shortly before his 21st birthday.[3] In August 2010 he had a civil partnership with Lincolnshire Fire & Rescue Employee Mark Latham, but they have since separated.[4]

Lee Pearson has been selected to compete in the London 2012 Paralympics.[5]