Cumbria showing districts:
1 Borough of Barrow-in-Furness
2 South Lakeland
3 Copeland
4 Allerdale
5 Eden
6 City of Carlisle
Cumbria is a county in north-west England. It was formed in 1974 from the former counties of Cumberland and Westmorland, the Furness section of Lancashire, and part of the West Riding of Yorkshire. It is the most mountainous county of England, and contains the Lake District National Park. 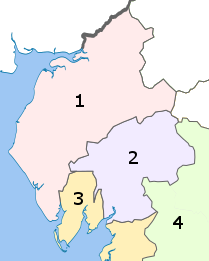 The former Queer Cumbria website aimed to provide a comprehensive guide and directory of all things LGBT in Cumbria.[1]

The painter Percy Kelley was born in Cumbria.

Cumbria Pride is held in Carlisle.[2]