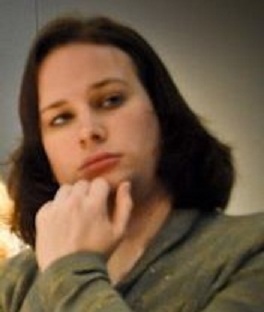 Juliet Jacques
Juliet Jacques (born Redhill, Surrey 1981) is a journalist and LGBT activist, known for her work on the transgender experience, including her transition to being a trans woman.[1] She grew up in Horley, and went to school in Horsham, West Sussex.

She has written regular columns for The Guardian,[2] The New Statesman,[3] and published extensively on film in Filmwaves, Vertigo and Cineaste. She began writing a chronicle of her gender reassignment in 2010, for which she was longlisted for The Orwell Prize.[4]

She is an enthusiastic footballer, and won the Shield with the Brighton Bandits at the 2008 IGLFA World Cup.[5]

"Ex-footballer whose unflinching account of undergoing gender reassignment surgery this summer won her a loyal audience. Her blog was longlisted for last year's Orwell Prize; also writes for New Statesman and The Guardian."[6]