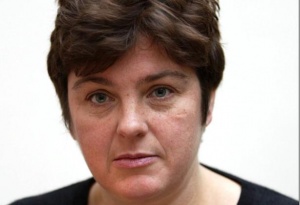 Her regular newspaper articles in The Guardian have often highlighted feminist issues and opposition to the sex industry. She co-founded Justice For Women, which opposes violence against women from a feminist viewpoint.[1]

Julie Bindel is lesbian; her partner is Harriet Wistrich, a human rights lawyer[2]

She has attracted considerable opposition from trans groups for her views on transsexualism, for instance her 2004 Guardian article "Gender benders beware".[3]