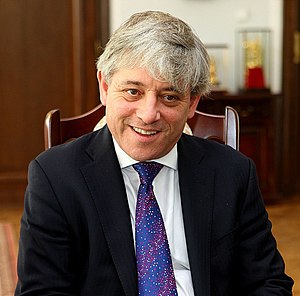 John Bercow
John Bercow (born 1963) has been MP for Buckingham since 1997, and Speaker of the House of Commons since 2009. Before being elected Speaker he sat as a Conservative.

He was born in Edgware and studied Politics at the University of Essex. He was a councillor in the London Borough of Lambeth from 1986 to 1990.

In November 2002, when the Labour government introduced the Adoption and Children Act, which would allow unmarried gay and heterosexual couples to adopt children, the Conservative Leader Iain Duncan Smith imposed a three-line whip, requiring Conservative MPs to vote against the bill. In protest, Bercow defied the whips and voted with Labour, saying it should have been a free vote. He then resigned from the front bench.[1]

In 2010 he was listed as "Politician of the Year" in the Stonewall Awards.

In 2011 he hosted a reception for the launch of the Kaleidoscope Trust.

In 2014 he was listed under "Straight Allies" in the World Pride Power List. The citation said:

"John Bercow has long been a supporter of equal marriage. He has won the Stonewall award for Politician of the Year for his work to support LGBT equality and is the president of the Kaleidoscope Trust, the charity that works on gay human rights globally."[2]