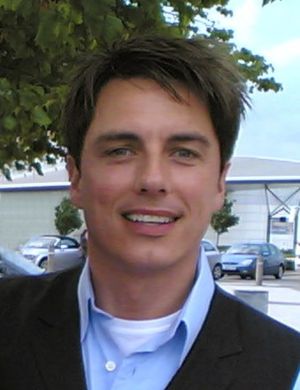 John Barrowman in 2007
John Barrowman (born Glasgow, 1966) is an actor, singer and dancer, perhaps best known for playing "Captain Jack Harkness" in the BBC televsion series Doctor Who and Torchwood.

He was born in Glasgow, but the family moved to the USA when he wsa three years old. He now has dual British and American citizenship. He moved to the UK in 1990.

John Barrowman is gay.[1] He celebrated his civil partnership with Scott Gill in Cardiff in 2006: the couple had been together for 16 years.[2] In June 2013 the were married in California, following a US Supreme Court ruling that Californian same-sex marriages were legal.[3]

John Barrowman was voted Stonewall Equality Limited entertainer of the year in 2006.

The man with the pearliest whites in showbiz has had a relatively quiet 12 months — relatively, because it has included co-writing a children's novel with his sister and a leading role in US superhero series Arrow. And there's his forthcoming panto gig in Jack and the Beanstalk in Glasgow.[4]