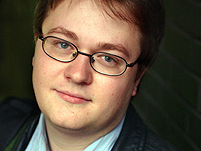 He was born in Glasgow but brought up in London. He studied social and political science at King's College, Cambridge. While at Cambridge he was joint winner of The Times Student News Journalist of the Year award. He worked for the New Statesman and was a columnist for The Independent, as well as writing for various other publications.

"The Independent's 31-year-old star columnist keeps raking in the prizes, recently scooping Amnesty International's Journalist of the Year and the Martha Gelhorn prize. His investigations into corruption, and gender and racial inequalities have earned him a worldwide following."[2]

In 2011 he was accused of plagiarism, having apparently used other people's work in his interviews without acknowledgment. This led to his being suspended from The Independent. He has since admitted misconduct and apologised.[3]