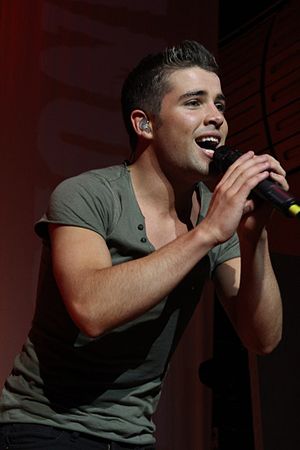 McElderry at The Sage Gateshead, 2012
Joe McElderry (Joseph McElderry, born 1991) is a singer and songwriter.

He was born in South Shields and studied performing arts at Newcastle college.

He won the sixth series of the ITV show The X Factor in 2009.[1] His first single "The Climb" reached number one on the UK Singles Chart. He won the second series of Popstar to Operastar in 2011.

In July 2010, McElderry announced on his official website that he is gay[2] Stonewall has listed McElderry as a gay role model.[3]