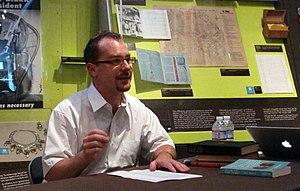 Jesse Bering speaking at The GLBT History Museum in San Francisco
Jesse Bering (born May 1975) is the Director of the Institute of Cognition and Culture and a Reader in the School of History and Anthropology at Queen’s University, Belfast.

A research psychologist by training, he writes the popular weekly Bering in Mind, a featured blog/column for the Scientific American website. Bering is notable for his frank and humorous handling of controversial issues in psychological science, especially those dealing with human sexuality. The column was named a 2010 Webby Honoree for the blog-cultural category by members of The International Academy of Digital Arts and Sciences. He also received the 2010 "Scientist of the Year Award" by the National Organization of Gay and Lesbian Scientists and Technical Professionals (NOGLSTP), an affiliate of the American Association for the Advancement of Science.

"Openly atheistic and comfortable gay"[1] he is the author of The God Instinct, The Psychology of Souls, Destiny and the Meaning of Life.