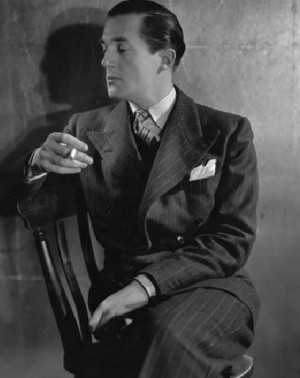 Sir Hardy Amies
Sir Hardy Amies (Edwin Hardy Amies, 1909-2003), was a fashion designer, founder of the Hardy Amies label and best known for his official title as dressmaker for Queen Elizabeth II, from her accession in 1952 until his retirement in 1989.

He was born in Maida Vale and went to school in Brentwood. He entered the world of fashion in the 1930s. During World War II he was a member of the Special Operations Executive and worked with resistance groups in Belgium. IN 1945 he set up his own fashion house, and in 1964 he published a book called "ABC of Men's Fashion".

Initially discreet about his homosexuality, Amies became more candid in his old age; and, when speaking of Sir Norman Hartnell, another renowned dressmaker to the Queen, he commented: "It's quite simple. He was a silly old queen and I'm a clever old queen".

Amies and his partner, Ken Fleetwood, Design Director of Hardy Amies Ltd, were together for 43 years until Fleetwood's death in 1996. Amies died at home in 2003, aged 93.

"The Queen's couturier for many years, Amies was a fashion guru before the term was invented, a living link with the era of Cecil Beaton and classic English style. At 91 he delivers his judgments on passing trends with an undiminished acuity."[1]