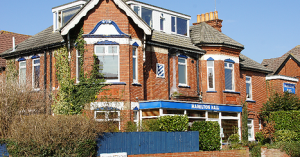 "Hamilton Hall is NOT your bog-standard B&B! This place is a retreat (and a treat) for gay men only. Clothing is optional. Atmosphere is nurturing, relaxed, friendly and informal. Rooms are extremely comfortable and beautifully presented.[1]

In 2011 the guesthouse was investigated under equalities legislation because of its "gay men only" policy,[3] but was cleared by the EHRC.

"So in 2011 we were contacted by the Equality & Human Rights Commission ... we were sent a very nice letter stating we could remain as a MEN ONLY VENUE, all legal and correct."[4]

Many years ago, my then partner and I used to stay at St Michael's Guest House, which was then exclusively gay but has since gone straight, so I was interested to hear of a new gay guest house, Hamilton Hall. After losing my husband, Roger Burg, in 2017 I felt the need to get away, so when Hamilton Hall emailed me details of a very attractive discount for the summer season I booked up at once.

As a newly single man, I would not have wanted to stay in an ordinary, impersonal hotel, knowing no-one and having meals by myself. As soon as I arrived at Hamilton Hall I felt I was among friends. Breakfast, and dinner for those not eating out, is taken at one big table, with John Bellamy, the owner, presiding over a changing mix of interesting men from different parts of the country, each with their own story and their own contribution to the ongoing conversations. John, a former gay sex worker, bought Hamilton Hall in 2000 and has obviously done a lot to improve it since then.

Hamilton Hall is a men-only guest house and it’s clothing-optional. I was there for a week at the beginning of August 2017, when the weather was not particularly warm; some of the guests nonetheless went naked for at least part of the day, and others compromised by wearing nothing but a shirt.

One evening some of us staying at Hamilton Hall went out to DYMK and The Xchange. Another day four of us took the bus and ferry to Studland Bay. We were walking towards the famous gay naturist beach when the heavens opened, so we gave up and went back into Bournemouth. Fortunately there are indoor attractions in and around the town, and returning to the guesthouse for one of John's delicious meals was a high point of most days.

I’d been a bit hesitant about staying at Hamilton Hall, but I certainly plan to stay there again next year, and pay another visit to my namesake Ross the masseur (https://www.gaymassagebournemouth.co.uk/).

On my last morning I joined the group that John runs every Wednesday for local gay/bi men over 50. I discovered that a surprising number of the men at the coffee morning, and of those staying in the guesthouse, had had wives and children, which struck me as very different from myself and most of my gay friends.[5]