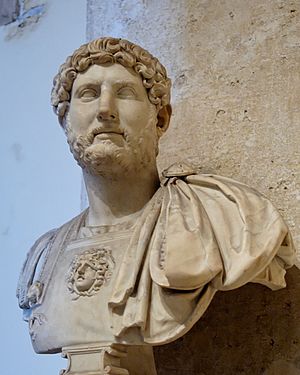 Marble bust of Hadrian
Publius Aelius Trajanus Hadrianus Augustus, known in English as Hadrian (AD 76–138) was Roman Emperor and thus ultimate ruler of what is now England and Wales. He succeeded Trajan as Emperor in AD 117. During his reign he travelled widely around the Empire, visiting Britain in 122, and ordering Hadrian's Wall to be built at the northernmost boundary of the Empire.

Hadrian was a great admirer of Greek culture, and wore a beard in the Greek fashion, which had previously been unfashionable amongst Roman Emperors.

Although married, his main romantic attachments seem to have been with men. In particular, he loved a Greek youth from Bithynia named Antinous. When Antinous was drowned in the Nile in 130 Hadrian is said to have "wept like a woman". He had Antinous proclaimed a god, and erected statues and temples to him throughout the empire.

In 2012, an episode of the BBC series Treasures of Ancient Rome featured an item on the cult of Antinous, including an interview with Hernestus, said to be a priest of Antinous.[1]