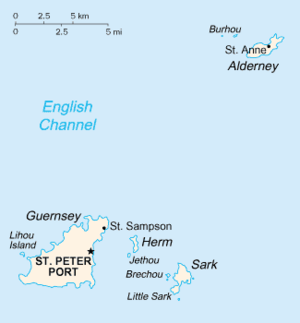 The Guernsey CHE Group was founded in 1973.

In the Bailiwick of Guernsey, male homosexual acts were decriminalised by the Sexual Offences (Bailiwick of Guernsey) Law, 1983, with the age of consent set at 21. The age remained at 21 until after it had been reduced in England and Wales to 18 and then to 16, provoking protests from local young gay men.[1]

Note: a bill ("Projet de Loi") passed by the States of Guernsey does not become a Law ("Loi") until it has been approved by the Privy Council in London and then registered at the Royal Court in Guernsey, resulting in some delay. So for instance the 2011 Law arose from a vote by the States in 2010.

https://twitter.com/GayGuernsey Gay Guernsey Twitter page: links to the main Gay Guernsey page at http://www.gaygsy.com/ but that is now a dead link (and not found on the Internet Archive).