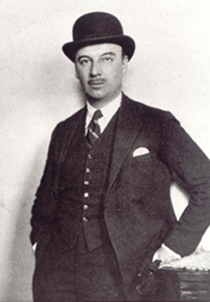 Berners was born in Apley Hall, Shropshire, in 1883. His father, a naval officer, was rarely home. He was raised by a grandmother who was extremely religious and self-righteous, and a mother who had little intellect and many prejudices. His mother ignored his musical interests and instead focused on developing his masculinity, a trait Berners found to be inherently unnatural.

The eccentricities Berners displayed started early in life. Once, upon hearing that you could teach a dog to swim by throwing him into water, the young Gerald promptly decided that by throwing his mother's dog out the window, he could teach it to fly. The dog was unharmed, though the act earned Berners a beating.

After devising several inappropriate booby traps, Berners was sent as a boarder to Cheam School at the age of nine. It was here that he would first explore his homosexuality; for a short time, he was romantically involved with an older pupil. The relationship was abruptly ended after Berners accidentally vomited on the other boy.

Gerald continued his education at Eton College. Later, in his autobiographies, Berners would reflect on his experiences at Eton, claiming that he had learned nothing while there, and that the school was more concerned with shaping the young men's characters than supplying them with an education.

As well as being a talented musician, Berners was a skilled artist and writer. He appears in many books and biographies of the period, notably portrayed as "Lord Merlin" in Nancy Mitford's The Pursuit of Love. He was a friend of the Mitford family and close to Diana Guinness.

Berners was notorious for his eccentricity,[1] dyeing pigeons at his house in Faringdon in vibrant colours and at one point having a giraffe as a pet and tea companion. His Rolls-Royce automobile contained a small clavichord keyboard which could be stored beneath the front seat. At his house he had a 100-foot viewing tower constructed, a notice at the entrance reading: "Members of the Public committing suicide from this tower do so at their own risk".

Berners fell in love at the late age of 49 with Robert Heber Percy, 29 years his junior. Heber Percy became his live-in companion from 1932 till Berners died in 1950.[2]

His mother was unaware of his homosexuality, and was disturbed to hear he was associating with a notorious lesbian (Violet Trefusis). He agreed to dissociate himself from her, and placed an announcement in The Times:

Lord Berners wishes to announce that he has left Lesbos for the Isle of Man.[3]

He was subject throughout his life to periods of depression. These became more pronounced when Berners, who had lived in Rome from 1939 to 1945, found himself somewhat out of favour after his return to England.

He died in 1950 at Faringdon House, bequeathing his estate to his companion Robert ('Mad Boy') Heber Percy, who lived at Faringdon until his own death in 1987.

The epitaph on his gravestone reads:

Here lies Lord Berners
One of life's learners
Thanks be to the Lord
He never was bored.

Berners' musical works included Trois morceaux, Fantasie espagnole (1919), Fugue in C minor (1924), and several ballets, including The Triumph of Neptune (1926, based on a story by Sacheverell Sitwell) and Luna Park (1930). In later years he composed several songs and film scores, notably for the 1947 film Nicholas Nickleby.

His friends included the composers Constant Lambert and William Walton and he worked with Frederick Ashton. Walton dedicated Belshazzar's Feast to Berners, and Lambert wrote a Caprice péruvien for orchestra, on themes from Lord Berners' Le carrosse du St Sacrement.

Berners wrote several autobiographical works and some novels, mostly of a humorous nature. His autobiographies First Childhood (1934) and A Distant Prospect (1945) are both witty and affectionate.

Berners obtained some notoriety for his roman à clef The Girls of Radcliff Hall (punning on the name of the famous lesbian writer Radclyffe Hall), published under the pseudonym "Adela Quebec", in which he depicts himself and his circle of friends, such as Cecil Beaton and Oliver Messel, as members of a girls school.[1][4][5] This frivolous satire, which was privately published and distributed, had a modish success in the 1930s. The original edition is rare; rumour has it that Beaton was responsible for gathering most of the already scarce copies of the book and destroying them. However, the book was reprinted in 2000.

His other novels, including Romance of a Nose, Count Omega and The Camel are a mixture of whimsy and gentle satire.

Based in part on a Wikipedia article: http://en.wikipedia.org/wiki/Gerald_Tyrwhitt-Wilson,_14th_Baron_Berners