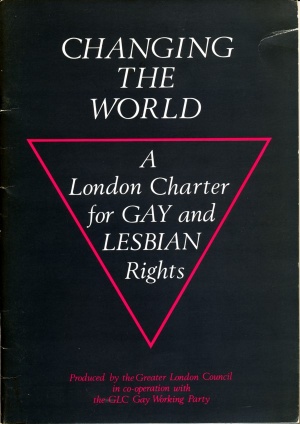 Cover of Changing the World
The Gay Rights Working Party was a working party (committee) of the Greater London Council (GLC), between 1976 (or 1981) and 1986 (when the GLC was abolished).

The working party was formed to investigate gay issues in London. Its work culminated in the publication of Changing the world: A London charter for gay and lesbian rights. The working party was particularly concerned with employment rights and police attitudes, and liaised with gay groups throughout the capital.

One of the important points of its activity was the forming of the Gay London Police Monitoring Group (now GALOP) in 1982.

Based on a Wikipedia article. http://en.wikipedia.org/wiki/Gay_Rights_Working_Party