Fellowship of Christ the Liberator

From LGBT Archive
(Redirected from Fellowship of Christ Liberator)
Jump to: navigation, search 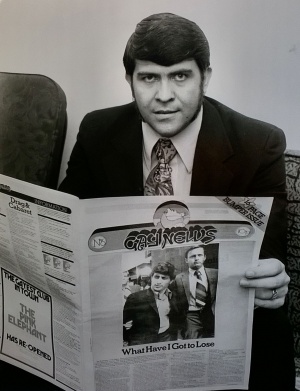 Troy Perry in 1973 with Gay News
The Fellowship of Christ the Liberator was a religious group, founded in 1972 by Tony Cross, then a Unitarian minister in Catford. It was launched in 1972 at the Bloomsbury Central Baptist Church.

The inspiration for the group was the visit to the UK of Rev Troy Perry, founder of the Metropolitan Community Church in the USA. Eucharists were held once a fortnight at Peter Embrey's house in Barons Court, and welcomed both gay and straight. About a year later some members wished to affiliate with the Metropolitan Community Church, but the group was divided over this issue, as some felt that this would conflict with their loyalty to their previous organisations.[1] Tony Cross and Peter Embrey resigned, but the majority, led by Joe McVay-Abbott voted to form what became MCC London[2].