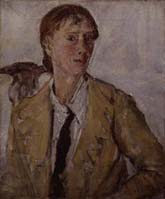 Self-portrait
Dame Ethel Walker (1861–1951) was a painter, best known for her portraits of the female form.

She was born in Edinburgh but educated in London. In 1880 she met fellow artist Clara Christian, and the two women began living, working and studying together.[1]

Walker was a supporter of the natural female form, often publicly rebuking other women for wearing makeup and heavy clothing that hid their form. Her models were never allowed to wear makeup, lipstick, or nail polish during sittings. In Invocation, considered her most detailed piece, Walker used 25 female models, all either scantly clad or nude, kneeling around three female models wearing sheer cloth[2]. Birds are depicted fluttering overhead.

She was appointed a Dame of the British Empire (DBE) in 1943.