From LGBT Archive
(Redirected from Edward II of England)
Jump to: navigation, search 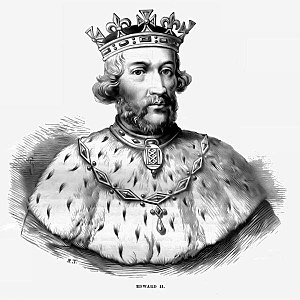 Edward II, depicted in Cassell's History of England, published circa 1902
Edward II (1284–1327) was King of England from 1307. He was born at Caernarfon Castle, and there is a story that his father, Edward I, presented him to the people there as Prince of Wales.

Edward married Isabella of France, and had four children by her, including the future Edward III, plus at least one illegitimate child. However he was known for his intimate relationships with men, notably Piers Gaveston whom he made Earl of Cornwall. Chroniclers called the relationship with Gaveston "excessive, immoderate, beyond measure and reason" and criticised his desire for "wicked and forbidden sex"[1].

In 1314, Edward lost the Battle of Bannockburn to Robert the Bruce of Scotland, considered to be the worst English defeat since the Battle of Hastings in 1066.

Edward's reign was disrupted by conflict with the barons, but came to an end after his wife began a liaison with Roger Mortimer. Isabella and Mortimer invaded England in 1326, and Edward was captured and held prisoner in Kenilworth Castle, where he was forced to abdicate in favour of his 14-year-old son. He was taken to Berkeley Castle and murdered. Later stories claim that he was killed by having a red-hot poker thrust through his anus, but there is no contemporary evidence for this.

Edward was buried in Gloucester Cathedral where his tomb became a place of pilgrimage.