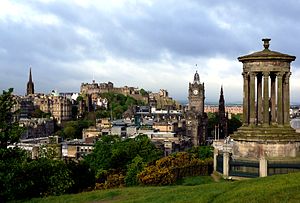 Edinburgh from Calton Hill with the Dugald Stewart Monument
Edinburgh is the capital of Scotland and the second-largest city in Scotland (after Glasgow).

Before 1975, Edinburgh was a Royal Burgh within the county of Midlothian. Between 1975 and 1996 it was part of the Lothian region. Since the introduction of single-tier local government throughout Scotland in 1996, the City of Edinburgh has been a unitary authority. Edinburgh is now the home of the devolved Scottish Government and Scottish Parliament.

In the 1980s Edinburgh and The Lothians lesbian and Gay Youth Movement provided social activities and support for young people under 26. The group met at the LGBT bookshop, Lavender Menace.

Remember When was an oral and community history project documenting the lives and achievements of Edinburgh's LGBT people, past and present.[2]

The City of City of Edinburgh Council, Equalities Network is a former member of the LGBT Consortium:

"City of Edinburgh Council Equality Unit support the Council in the implentation of its strategy of mainstreaming equalities issues. They aim to engage equalities groups in Council decision-making by supporting the work of 5 equality forums, including one for LGBT people."[3]

Pride marches (currently Pride Scotia) have been held in Edinburgh since 1994.