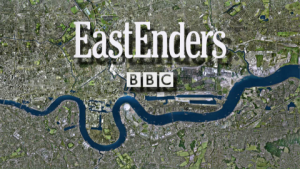 EastEnders title screen
EastEnders is a television soap opera, set in the East End of London. It was created by Julia Smith and Tony Holland and has been broadcast on BBC One since 1985.

In 1987 EastEnders showed the first ever gay kiss in a UK soap, much to the outrage of the viewing public.[7] A small kiss on the forehead, given to Barry from Colin, received a record number of complaints from angry viewers. In addition, the right-wing British press reacted with fury.[8] In January 1989, there was further uproar at the time for broadcasting the first mouth-to-mouth kiss between two gay men on British television [9].