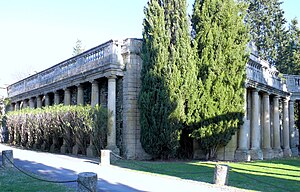 A substantial legacy enabled him to study art history in Paris and in Marburg, Germany. In the 1930s be began what was to become a substantial collection of Cubist paintings. In the Second World War he acted for a time as an interrogator in Cairo, a task for which he was very well suited.[1] He later joined a unit investigating art works looted by the Nazis.[2]

After the war he found he could not settle in England, and bought the Château de Castille, Argilliers, near Avignon, which he restored and transfored into a museum of Cubist art.

In 1950 he met the art historian John Richardson. They lived together at the Château, and both became friends of Picasso. In 1960 Cooper and Richardson split up, Richardson moving to New York. In 1961 Coooper picked up a yong man in Nîmes, who demanded money and stabbed him, causing serious injury. The culprit was arrested and claimed to have been resisting a sexual assault.[3]

Cooper later moved to Monte Carlo, following a burglary at the Château.