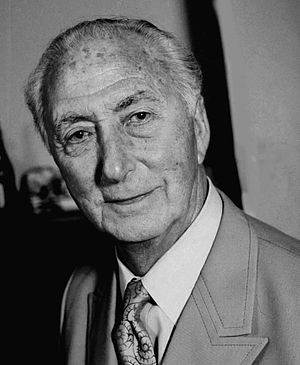 Douglas Byng (Douglas Coy Byng, 1893–1987) was an English comic singer and songwriter in West End theatre, revue and cabaret. He was born in Basford, Nottinghamshire.

Billed as "Bawdy but British", Byng was famous for his female impersonations. His songs are full of sexual innuendo and double entendres. An openly gay performer, Byng was noted for his camp performances in the music halls and cabaret.[1] Byng made a large number of recordings, many of which have been transferred to CD. He was also a noted pantomime dame and appeared in over 30 pantomimes.

He made his last appearance in 1987 in a one-man show at the National Theatre in London at the age of 93.[1] He also wrote an autobiography, As You Were (1970). He features prominently in Patrick Newley's autobiographical memoir The Krays and Bette Davis (2005).