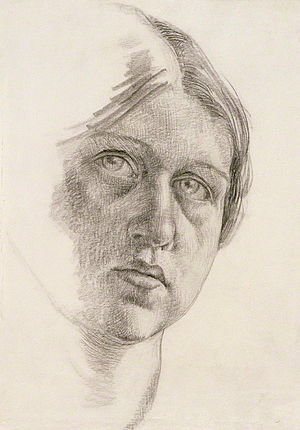 Self-portrait
Dora Carrington (Dora de Houghton Carrington, 1893–1932) was a painter and decorative artist. She was born in Hereford and studied at the Slade School of Art at University College London. While at the Slade she ceased using her first name, and was generally known, even after her marriage, as just Carrington.[1] She also cut her her short, which was very unfashionable at that time.

In 1915 she met Lytton Strachey and almost immediately fell in love with him. He remained the love of her life, in what was an almost entirely platonic relationship: he was homosexual and both had relationships with other people. In 1921 she married Ralph Partridge; Carrington, Partridge, and Strachey set up house together at the Mill House at Tidmarsh, and later at Ham Spray House, Hungerford. Carrington dislked the idea of marriage (and especially the idea of having children) but her marriage was partly so that she could continue living with Strachey, who was in love with Partridge.[2]

Carrrington is not usually considered part of the Bloomsbury Group, but was on the fringes of it, and met many of the other members for instance at Garsington Manor, the home of Lady Ottoline Morrell.

Carrington was probably bisexual, and is known to have had at least one short-lived lesbian affair, with Henrietta Bingham.

In 1932, when it was clear that Strachey was on the point of death, she attempted to kill herself, but was prevented just in time. She went on to shoot herself two months later.