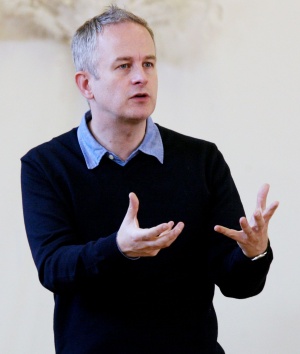 Dominic Cooke
Dominic Cooke (born 1966) is a theatre director and playwright.[1] He won the 2007 Laurence Olivier Award for best director for his revival of The Crucible while working at the RSC. He took over as the Artistic Director of the Royal Court Theatre in London in 2006 and his tenure was widely hailed a success staging much new work and refocusing the aims of the theatre. Apart from being a successful director he has also adapted Malorie Blackman's novel Noughts and Crosses for stage and wrote a version of the Arabian Nights.

He was born in Wimbledon and studied at Warwick University. In 2006 he became the Artistic Director of the Royal Court Theatre.

Cooke is openly gay. He has been with his partner, the actor and award-winning playwright Alexi Kaye Campbell since 1997.[2]

"From Jerusalem and Clybourne Park to Posh, the new-writing hits have flowed steadily during Cooke's six-year reign as the Royal Court's artistic director. He will step down in April 2013, but not before directing the Christmas show In the Republic of Happiness."[3]</ref>.