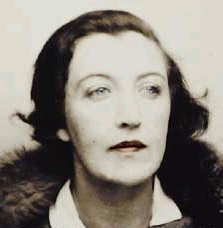 Dorothy Ierne Wilde, known as Dolly Wilde, (July 11, 1895 – April 10, 1941) was an Anglo-Irish socialite, made famous by her family connections and her reputation as a witty conversationalist. Her charm and humor made her a popular guest at salons in Paris between the wars, standing out even in a social circle known for its flamboyant talkers.

Wilde, born in London three months after her uncle Oscar Wilde's arrest for homosexual acts, was the only child of Oscar's older brother, Willie. Her father died just a few years later, and she was raised by her mother and her stepfather, the translator Alexander Teixeira de Mattos.

In 1914, she travelled to France in order to drive an ambulance in World War I. During the war she had an affair with one of her fellow ambulance drivers, Standard Oil heiress Marion Betty ‘Joe’ Carstairs, who in the 1920s became a speedboat racer and was known as "the fastest woman on water". Although she "revelled in" attracting both men and women, Wilde was primarily, if not entirely, lesbian.

Dolly Wilde was regarded by many as a gifted storyteller and writer, but she never took advantage of these natural talents. She was supported mostly by the generosity of others and by a small inheritance from her stepfather; her only written works were translations - often uncredited and unpaid - and animated correspondence with her friends. Wilde drank to excess and was addicted to heroin. She went through several detoxification attempts, none successful; she emerged from one nursing-home stay with a new dependency on the sleeping draught paraldehyde, then available over-the-counter.

In 1939 she was diagnosed with breast cancer and refused surgery, seeking alternative treatments. The following year, with the Germans approaching Paris, she fled for England. She died aged 45 in 1941, of "causes unascertainable", according to the coroner's inquest - possibly the cancer or possibly a drug overdose.