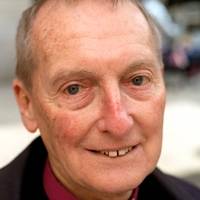 Rawcliffe was born in Manchester but lived in Gloucester as a teenager. He trained for the ministry at Mirfield, and took a theology degree in Leeds. He took up a teaching post in the Solomon Islands in 1947, and spent much of his career in the South Pacific, rising to be the first Bishop of the New Hebrides (now Vanuatu).[1]

In 1981 he returned to the UK and was appointed Bishop of Glasgow and Galloway in the Scottish Episcopal Church, on the basis of reports of his success as a bishop in the south seas, but although his pastoral skills were valued, he was less successful in coping with the administrative problems of the church in Glasgow.[2] In 1991 he retired and went to live in Leeds, and was invited to be an honorary bishop in the diocese of Ripon.

At the age of 50 Rawcliffe had fallen in love with a young Melanesian man and come to believe that his homosexuality was "a gift from God". However he fell in love with a disabled former ballet teacher, Susan Speight; they were married in 1977 and spent 12 happy years together. After her death he realised "I was still gay, always had been".[2]

In 1995 he revealed in a television programme that he was gay. Later that year he wrote to Gay Times urging that the age of consent for gay sex should be reduced to 14:

"I had my first relationship when I was 14 with a man 10 years my senior. I knew what I was doing and gave my consent".[2]

These revelations prompted the Bishop of Ripon to stop inviting him to carry out episcopal functions; but the next year it was revealed that he had been carrying out blessings of gay relationships and at this point his licence to act as a bishop was withdrawn.

Towards the end of his life he published a number of books and poems.

Derek Rawcliffe was a strong supporter of the Lesbian and Gay Christian Movement, coordinating its Welcome letter writing scheme and the Pen Friend Scheme for many years. He also acted as convenor for the Leeds LGCM group.[3]