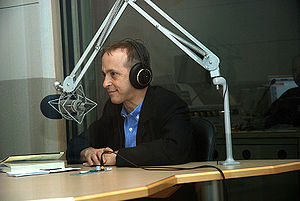 Sedaris was born in Binghamton, New York, and grew up in Raleigh, North Carolina. He is of Greek descent on his father's side.

Sedaris currently lives in West Sussex, with his longtime partner Hugh Hamrick, who has been mentioned in a number of Sedaris's stories.[1] Sedaris describes them as the "sort of couple who wouldn't get married".[2][3]

He has been presenting a series of talks on BBC Radio Four.