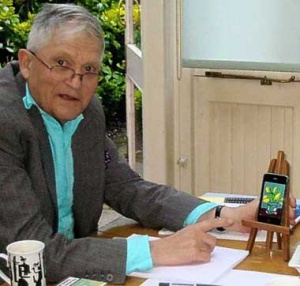 David Hockney
David Hockney (born 1937) is an English painter, also known for his drawings, prints, stage sets and photocollages. He is considered one of the most influential British artists of the twentieth century.

He was born in Bradford and studied at Bradford College of Art and the Royal College of Art in London. As a conscientious objector, Hockney worked as a medical orderly in hospitals as his National Service in 1957–59.[1]

In 1963 he visited New York, and met Andy Warhol. Later he lived for many years in California, producing a series of paintings of swimming pools.

In June 2007, Hockney's largest painting, Bigger Trees Near Warter, which measures 15x40', was hung in the Royal Academy's largest gallery in their annual Summer Exhibition.[2] This work "is a monumental-scale view of a coppice in Hockney's native Yorkshire, between Bridlington and York. It was painted on 50 individual canvases, mostly working in situ, over five weeks last winter."[3] In 2008 he donated this work to the Tate Gallery in London, saying: "I thought if I'm going to give something to the Tate I want to give them something really good. It's going to be here for a while. I don't want to give things I'm not too proud of...I thought this was a good painting because it's of England...it seems like a good thing to do".[4]

In 2012 the Royal Academy mounted an exhibition of over 150 of Hockney's works called "A Bigger Picture".[5] The exhibition was dedicated to landscapes, especially trees.[6] Works include oil paintings and watercolors inspired by Hockney's native Yorkshire. Around 50 drawings were created on an iPad[7] and then printed on paper for the exhibition. Hockney stated in a 2012 interview "It’s about big things. You can make paintings bigger. We’re also making photographs bigger, videos bigger, all to do with drawing."[8]

Many of Hockney's works are now housed in Salts Mill, in Saltaire, near his home town of Bradford.