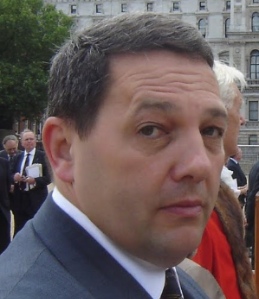 David Coburn
David Coburn is a UKIP politician. He was elected to the European Parliament in May 2014 for the Scotland region and is openly gay.[1]

David Coburn was educated at the High School of Glasgow. He contested Old Bexley and Sidcup in 2010, and Bexley and Bromley in the 2012 London Assembly election, finishing fourth. He lives in Kensington.[2]

David Coburn describes himself as a libertarian and he has vowed to push a hardline “libertarian agenda”. He said he wanted businesses to be free of interference from government. He has spoken out against Scottish independence.[3][4]

He has opposed same-sex marriage, saying "I think it does the gay community no good whatever to cross the street to pick a fight with people of faith."[5]