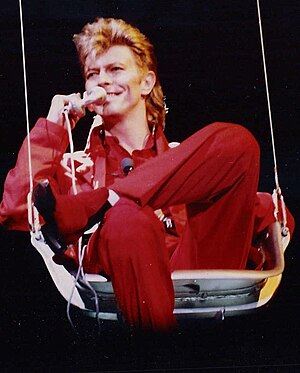 He was born in Brixton and brought up there and in Bromley. His first hit record was "Space Oddity" released in 1969 a few days before the Apollo 11 launch. In 1972 he adopted the flamboyant "Ziggy Stardust" persona for his stage appearances.

In 1974 Bowie moved to New York and then Los Angeles, a period characterised by drug abuse and legal disputes with managers. In 1976 he played the lead role in the film The Man Who Fell to Earth. In 1976 he moved to Switzerland and later to West Berlin, where he recorded several influential albums.

In 1983, having overcome his drug habit, he starred in the film Merry Christmas Mr Lawrence. He continued recording and touring until he had a heart attack in 2004.

He was married to the America actress Angela Bowie from 1970 to 1980, and has been married to the Somali fashion model Iman since 1992. However he did describe himself as gay in an interview with Melody Maker in 1976,[1] and told a Playboy interview in 1976 that he was bisexual.[2] He later said that declaring himself bisexual was "the biggest mistake I ever made. ... I was always a closet heterosexual."[3]