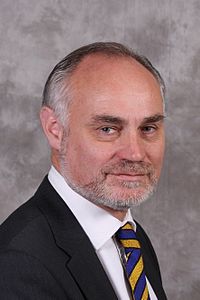 Crispin Blunt
Crispin Blunt (born 1960) is a Conservative politician. He was born in Germany to English parents, educated at Sandhurst and the University of Durham, and served as an army officer. Since 1997 he has been MP for Reigate, Surrey.

In August 2010, he announced that he was leaving his wife, in order "to come to terms with his homosexuality".[1][2] Blunt's voting record in Parliament had previously been broadly unsympathetic towards gay rights,[3] though slightly more favourable when compared to the majority of his Conservative colleagues.[4]

Blunt is one of the most prominent Conservative advocates of transgender rights.

In April 2022 Wakefield MP Imran Ahmad Khan was found guilty of sexually assaulting a 15-year-old boy in 2008. Blunt called the verdict a "dreadful miscarriage of justice" in a statement. Although he subsequently apologised for the comment, the official Conservative Party LGBT+ group suspended him, pending an investigation and a membership vote. He also resigned as chair of a cross-party committee of MPs that campaigns for LGBT+ rights around the world, after several members of it quit in protest at his statement [5].