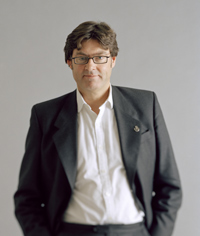 Colin Tweedy
Colin Tweedy (born 1953) is Managing Director of The Building Centre. Prior to that appointment he had been Chief Executive of Arts and Business (formerly the Association for Business Sponsorship of the Arts, ABSA).

He is a governor of the University for the Creative Arts, and Director of the Headlong Theatre (formerly the Oxford Stage Company) and the Mariinsky Theatre Trust. He established The Prince of Wales Arts & Kids Foundation as an initiative of Arts & Business and is a trustee.[1]

"Tweedy has never before publicly stated that he is gay. Although he has never hidden his sexuality, always taking his partner of 17 years' standing to formal events, he has chosen to come out as an example to others. As director-general of the Association for Business Sponsorship of the Arts, he has an increasingly important role within both the public and private sectors. He is vice-chairman of CEREC, a similar pan-European body, and is a trustee and council member of numerous charities and trusts. He is constantly moving between the different worlds of the arts, business and government. Tweedy: 'I believe it is important to be honest and to act as a role model for others.'"[2]