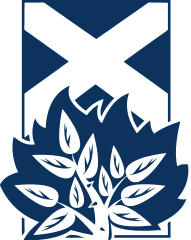 Church of Scotland logo
The Church of Scotland is the largest religious denomination in Scotland. It is recognised in law as the national church, but unlike the Church of England is not subject to state control. In terms of governance it is presbyterian, and therefore does not have bishops. Since 1968 women have been able to be ministers.

In 2009, Rev Scott Rennie, a gay man openly living with his partner, was appointed Minister of Queen's Cross Church, Aberdeen. His appointment was confirmed by the General Assembly, which also imposed a moratorium on the appointment of any other gay ministers. In 2013 the General Assembly voted in favour of gay ministers, prompting some congregations to break away from the church.

In May 2016 the General Assembly voted to allow its ministers to be in same-sex marriages.[1]