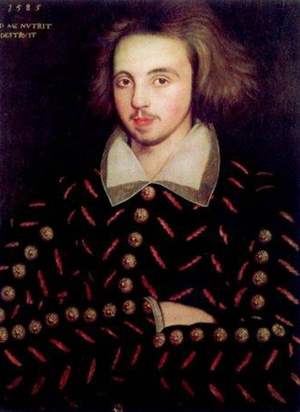 Portrait, possibly of Christopher Marlowe, in Corpus Christi College Cambridge
Christopher Marlowe (1564–1593) was an English poet and dramatist. He is sometimes thought to have been a secret agent, working for the English secret service. His plays include Tamburlaine, Doctor Faustus and Edward II.

Marlowe was born in Canterbury and educated at Corpus Christi College, Cambridge. He was stabbed to death in Deptford on 30 May 1593, in obscure circumstances.

Marlowe is sometimes described as gay, but this cannot be definitely established. Richard Baines, in the infamous "Baines Note"[1] reported Marlowe as saying: "All they that love not Tobacco and Boys are fools" but this statement has been described as unreliable. There are some passages in Marlowe's poetry that appear to show homoerotic themes.